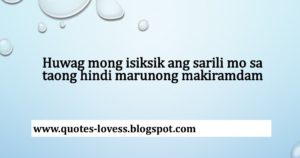 Courage is the ladder on which
all the other virtues mount.
– Clare Booth Luce

Courage is the most important quality in leadership.

Without courage, you may have a vision, but you will never pursue it.

Without courage, you may believe in something, but you will never stand up and speak for it.

All leaders need courage to pursue their visions. This is because true leaders often have to go against the status quo.

The status quo could be something as mundane as a process that has been used in a company for decades or it could be a belief in a culture about certain practices.

Leaders go against the status quo, not because it’s the cool thing to do; but because they know deeply inside what they wish to see in this world.

They are clear about their visions and to them, it doesn’t matter what the world thinks. It only matters what they think.

Often, these visions go against popular belief and they rock the boat. That’s why leaders often need to have the tenacity to follow through on their visions.

Alexander the Great didn’t get his men’s support to go all the way west to India, but he went anyway.

Jesus of Nazareth didn’t get his disciples’ support to give up his life to the angry Pharisees, but he did anyway.


You too, need to realize that whatever vision you might have in your life; it is ly to rock the boat; not everyone in your life will be happily agreeing your vision for your own life.

2.1 My Own Experience with Standing Up

Let me share some of my own experiences as well.

About 3 years ago, I was preparing a presentation about a community service project my group had embarked on. During the discussion, one of the members suggested that we misrepresent the information so that we could score better with our professors.

I was silent for a while, but then I said, “No. If you’re going to do that, then I won’t present. That’s cheating.”

That immediately got a few feathers ruffled. “You’re just being inflexible. We can be flexible about such things.”

A member stood up for me, “No, there’s a difference. This is a matter of principle.”

So in the end, it went according to my way.

Here’s another experience about a year later:

My group had got back a group assignment from the professor and we had received a low grade; to our horror we realized it was because we had forgotten to submit the answer to a particular question.

One of my group members suggested that we quickly add in the answers and tell the professor that she forgot to mark it.

I stood up and gave a firm no. “No, we will go and tell her that we forgot to submit in the question and apologize.”

That stopped my members in their tracks. It was awkward for a while, but they decided to do it my way in the end.


The professor gave us the marks for that question.

I mean, these experiences may not seem much to you; but I know that there’s where courage begins: standing up against our peers when we have to.

If we start compromising in a sheltered environment the university, it’s only going to get worse in the business and corporate world.

Wherever you are now, you have to start having the courage to stand up for what’s right.

That’s the beginning of leadership.

4.2 People Won’t Approve of You

The sad thing is that it often comes from those closest to you; your friends or family.

Those close to you often have an expectation of who you should be, and they want you to conform to that image.

When I chose to rise up to Presidency in University-YMCA, not everyone approved of it.

My parents were not happy with me being so involved in school activities. They came from a generation where it was about studying hard, doing well in university and getting a good, reputable paying job in the marketplace.

They never encouraged me about taking up leadership in University-YMCA. They preferred that I just do well in my studies.

One of my church leaders was not happy either. This leader wanted me to focus purely on ministry inside the church and didn’t the idea of me being committed elsewhere. To this leader, serving in church was a higher calling.

But I chose to go ahead anyway.

In my heart, I felt the call to take up leadership in University-YMCA. I did it, and I never regretted that decision.


I’m sure you want the same for your life too; you want to be someone notable; a leader in your field; but yet, the pressure from the people around you is simply too great.

Where did all the great leaders find courage to do what they did?

I can think of three ways you can find courage to live the life that you envisioned yourself to live.

First, read and learn about leaders that have overcome the same area in their lives. Read biographies of great leaders to inspire you. Watch movies of courageous leaders to bring out the same passion in you.

Remember, whatever was in those leaders you saw, it is in you too. No man has a different substance from another. Leaders are made, not born.

Often, I to watch war movies about war heroes  Balian in Kingdom of Heaven, Alexander the Great, Lawrence of Arabia, and so on.

They always leave me with a taste for adventure and keep me fired up for my own battles.

Next, keep yourself in the company of people who are encouraging and enabling. Most people are not as encouraging as we want them to be; most people don’t really think you’ll be anything great in your life.

You have to find friends that do.

I know it isn’t easy. It just isn’t easy to walk out there and decide, “You there. You’ll be my friend and ally that believes in me. Let’s take this life journey together.”

But you have to be intentional about it. Go join a leadership seminar; join a church.


Do something to meet new people that have a common belief.

For me, I have friends in University-YMCA who believe in the same vision, and people in my church who are constantly encouraging and edifying. Most importantly, they are people who believe in dreams.

They believe that everyone has a calling in life; and a great destiny that awaits them.

Third; this is somewhere where I cannot lead you, but it is probably the most powerful source of courage: your faith.

I’ll share about an illustration of faith-based courage from the Bible:

The early disciples of Jesus believed in Him so much that they were willing to go all the way to their deaths to preach the Gospel.

All the disciples of Jesus had suffered gruesome deaths while preaching the Gospel. According to history, the disciple Peter was crucified upside down and the disciple John was lowered into a pot of boiling oil.

This was the great faith of the early church. The disciples held on to their beliefs till their deaths.

Your faith tells you that there are things in life more important than life itself. Values integrity, truth are upheld greater than life itself because a greater reward is promised to those who uphold them.

My faith tells me that my God is with me; that He is always behind me. It gives me courage to stand up for what’s right; and for what’s true.

It gave me courage to speak my mind in those situations; and the courage to step out to take leadership in University-YMCA.


You need to find courage, for it is your ticket to living out your true vision.

Move on to Chapter 5: Integrity in Leadership

Read the Whole Book now by subscribing to my Newsletter!

Return from Chapter 4: Courage to Stand to Free Leadership ebook