Thank For the Joy is Abiding in Christ

For the Joy that Lay before Him 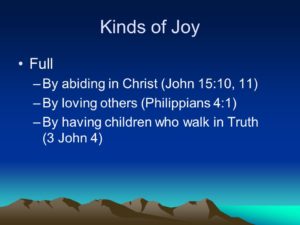 The eleventh chapter of Hebrews is said to be God’s “hall of faith.” Thrillingly, it chronicles a variety of marvelous examples of Old Testament faithful obedience, which are intended to encourage us in our Christian lives. With reference to this matter, the author declares:

“Therefore let us also, seeing we are compassed about with so great a cloud of witnesses, lay aside every weight, and the sin which so easily besets us, and let us run with patience the race that is set before us, looking to Jesus the author and finisher of the faith, who for the joy that was set before him endured the cross, despising shame, and hath sat down at the right hand of the throne of God” (12:1-2).

There are so many rich truths here tucked away that it is scarcely possible to consider them all in a brief article. Let us, though, mention a few matters.

We Are Compassed About

The heroes of the Old Testament are said to represent a great cloud of “witnesses” which, almost stadium-, surrounds us.

This does not affirm, as some surmise (Coffman, 309), that our deceased spiritual kinsmen literally are looking down, observing our present activity (cf. Eccl. 9:5-6).

Rather, it merely suggests that their abiding examples of faithful endurance are a cheering crowd, urging us toward victory.

Lay Aside Every Weight

the ancient runner who was compelled to shed every hindrance, the child of God is to lay aside every distraction, especially “the sin” which so easily besets (encompasses). The definite article seems to suggest a certain sin.

While some would see this “besetting sin” as any weakness to which one might be especially vulnerable (e.g., drunkenness or temper), more ly — consistent with contextual considerations — the expression denotes the sin of unbelief.

Earlier the writer had emphasized: “Take heed, brothers, lest haply there shall be in any one of you an evil heart of unbelief, in falling away from the living God” (3:12).


A.T. Robertson says that “the sin” was “apostasy from Christ” (433) — quite a concession from a Baptist. Charles Stanley, the popular television preacher, has argued that a Christian can completely abandon his faith, but God still will not allow him to be lost (84ff)! Such a notion is wholly foreign to the Bible.

The inspired writer urges that we are to keep running (the verb is a present tense form, denoting continuous activity) the race that is before us. As we run, we are to be “looking unto Jesus.

” “Looking” reflects a present tense participle form, and the original term suggests turning “the eyes away from other things” and fixing them on something else (Thayer, 90).

Obtaining the goal of heaven requires the utmost concentration; a haphazard disposition is not conducive to eternal salvation.

The Author and Finisher of the Faith

Christ is said to be the “author and finisher of the faith.” The common versions have “our faith,” but “the faith” is more precise (see Milligan, 343; Vine, 56).

No person has a right, therefore, to add to, subtract from, or to modify the New Testament body of doctrine. Let innovators who repudiate what they call “pattern theology” be admonished.

For the Joy that Was Set before Him

The most enigmatic portion of this verse is the affirmation that Christ endured the cross “for the joy” that lay before him. A key word is the preposition “for.” The Greek word is anti, which has several possible meanings. It commonly connotes “instead of” (see “in the stead of,” Gen. 22:13, LXX; cf. also Mk. 10:45).

This would suggest that Jesus chose to come to earth and endure the agonies of Calvary instead of continuing in his preincarnate heavenly state. It would emphasize the great sacrifice he made (cf. 2 Cor. 8:9).

Harris tends toward the meaning that Jesus came to earth “‘instead of’ the joy of continued fellowship in God’s immediate presence” (1180).

If this is the significance of the term here, then the meaning would be that the Lord willingly endured the shame of the cross in anticipation of the joy of effecting redemption for Adam’s fallen family.

Morris says: “He looked right through the Cross to the coming joy, the joy of bringing salvation to those he loves” (134). This view is probably more consistent with the context inasmuch as Jesus is portrayed as the model for the saints who long for the prize which is yet in their future.

Can we fathom the depth of love that Jesus Christ had for lost humanity? The horrors of Golgotha paled into insignificance when the Savior contemplated the refreshing salvation that would be available for all who choose to obey him (Heb. 5:9). This is absolutely astounding. How utterly selfish our own level of dedication appears by comparison.

He Endured the Cross

On account of his incomparable love, Christ “endured” the cross. The word is interesting. It derives from hupomeno.

Meno basically means to “abide, remain,” while hupo (under) is a preposition attached as a prefix to strengthen the term. The idea suggested is to “bear up under.

” It hints of the magnificent courage of the Lord as he hung suspended from the cross for six hours. For a consideration of what was involved in a crucifixion, see Edwards, et al. (1986).

Additionally, the inspired writer affirms that the Savior “despised” the “shame” connected with the cross. It was not merely the prospect of physical death that so repelled the Lord. Rather, it was the association of the cross with sin. His holy soul recoiled at the idea of being involved with the shame of man’s rebellion against God.

In Galatians 3:10-13 Paul discusses the “curse” that was associated with Jesus’ death on the cross. “Curse” hints of the fitting doom of which sin is deserving. The disgrace of the cross is clearly stressed by Paul in Philippians 2:8. Filthy human beings can hardly appreciate the magnitude of this matter; we can only express our profound gratitude and humbly submit to his holy will.

Finally, as Christ won the victory (having sat down on the throne — the perfect tense emphasizing the permanence of his accomplishment), so also shall the faithful. Too, observe that Jesus has achieved the “throne” already; it is not a future hope, as alleged by millennialists.

This passage thus sets forth the wonderful example of Christ. May we ever follow in his path.

Opening Prayer For A Christian Conference

Prayer For Protection From Danger In The Night

Prayer for Men with Families

My Prayer for Today

Prayer For A Newly Married Couple

Prayers For Mothers Who Have Miscarried

Thank For the Joy is Abiding in Christ
headings
×
Рекомендуем посмотреть

Prayers For Mothers Who Have Miscarried