Prayer For Peace in Israel

The operation and visitation of the Spirit in Israel is a vital part of releasing the great end-time harvest among the nations (Ezek. 36:23–36).

However, this full release of the Spirit will only come as a result of a body of believers who are committed to a life of night-and-day prayer and fasting.

Jesus Himself prophesied that He would raise up a last-day prayer movement that would cry out for the Jewish people (Isa. 56:6–7; 62:6–7). We take this mandate seriously.

Our mission is to mobilize an international prayer movement that would pray 24/7 for the nation of Israel to receive their Jewish Messiah, Yeshua (Jesus).

Jesus promised the nation of Israel an unusual visitation of His presence at the end of the age, when the Jewish leaders will recognize Him as their true Messiah and deliverer (Mt. 23:39).


We invite you to get involved and join us in praying for the nation of Israel. Join us on the free prayer room webstream, or in the Global Prayer Room here in Kansas City during our prayer meetings that focus on Israel.

*Email israelmandate@ihopkc.org for information
Please note that only the Global Prayer Room is streamed; prayer in side rooms is not on our webstream.

Houses of Prayer in Jerusalem

Scriptures to Use in Prayer for Israel

Jesus “bound” Himself by His own prophecy, saying He would only come back and rule in Jerusalem when Israel’s leaders ask Him to reign as King over them.

The Armageddon campaign is a battle for Jerusalem

Military forces of all nations will gather in one place and lay siege against Jerusalem.

“And it shall happen in that day that I will make Jerusalem a very heavy stone for all the peoples; all who would heave it away will surely be cut to pieces, though all the nations of the earth are gathered against it.” (Zech. 12:3)

“For I will gather all the nations to battle against Jerusalem.” (Zech. 14:2)

“In that day the Lord will defend the inhabitants of Jerusalem; the one who is feeble among them in that day shall be David, and the house of David shall be God, the Angel of the Lord before them. It shall be in that day that I shall seek to destroy all the nations that come against Jerusalem.” (Zech. 12:8–9)

“Then the Lord will go forth and fight against those nations, as He fights in the day of battle.” (Zech. 14:3)

At the same time, Jesus will bring spiritual breakthrough.

“And I will pour on the house of David and on the inhabitants of Jerusalem the Spirit of grace and supplication; then they will look on Me whom they pierced. Yes, they will mourn for Him as one mourns for his only son, and grieve for Him as one grieves for a firstborn” (Zech. 12:9-10)

“And it shall come to pass that whoever calls on the name of the Lord shall be saved. For in Mount Zion and in Jerusalem there shall be deliverance, as the Lord has said, among the remnant whom the Lord calls.” (Joel 2:32)

Jesus will rule over all nations from His throne of glory in Jerusalem.

“For the Lord has chosen Zion; He has desired it for His dwelling place. This is My resting place forever; here I will dwell, for I have desired it.” (Ps. 132:13–14)

Why Should We Pray for Israel? A Christian Perspective 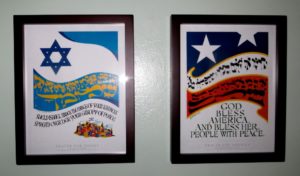 Why should we pray for Israel?  Does the Bible instruct us to?  Should we also be praying for the peace of Jerusalem the Old Testament prophets sometimes did?  Should a Christian be obligated to pray for Israel?

God is evidently still concerned over Israel, saying in 2 Chronicles 6:6, “Yet I have chosen Jerusalem, that My name may be there, and I have chosen David to be over My people Israel.”  Wherever God places His name is where He still places His love.  Jesus wept over Jerusalem, knowing what their fate held, “As he approached Jerusalem and saw the city, he wept over it” (Luke 19:41).

This may be the very reason that God has prospered the United States.  America is one of the few nations that have chosen to be her ally but that seems to have recently began to change.  When America withdraws her support and defense of Israel, God could take His hand of blessing off of the U.S.  Perhaps He has already begun to do so since relations with Israel have cooled off lately.

Israel is surrounded by hostile nations and a religion (Islam) that seeks her destruction.  A blessing is pronounced over those who will pray for and bless Israel (Numb. 24:9).  God will never abandon Israel and in the end, Israel will be saved by God Almighty (Malachi 3:6, Romans 11:1).

Since Paul commands Christians to pray for governmental authorities and leaders, (Rom 13:1-7) why should we not also be praying for peace in the Middle East and in particular, for Israel?  No, Israel is not perfect and she has made many mistakes, but they are God’s chosen people (Duet. 6:3-4).

Listen to what the prophet’s and Old Testament writers say about Israel:

Psalm 105:43 “He brought out his people with rejoicing, his chosen ones with shouts of joy.”

Isaiah 41:8-9 “But you, Israel, my servant, Jacob, whom I have chosen, you descendants of Abraham my friend, I took you from the ends of the earth, from its farthest corners I called you. I said, ‘You are my servant’; I have chosen you and have not rejected you.”

Deuteronomy 7:8-9 “But it was because the LORD loved you and kept the oath he swore to your ancestors that he brought you out with a mighty hand and redeemed you from the land of slavery, from the power of Pharaoh king of Egypt. 9 Know therefore that the LORD your God is God; he is the faithful God, keeping his covenant of love to a thousand generations of those who love him and keep his commandments.”

Deuteronomy 14:2 “For you are an holy people unto the LORD your God, and the LORD has chosen you to be a peculiar people unto himself, above all the nations that are upon the earth.”

Why We Should Pray for Israel

”  Not only does this say that we should pray for the peace of Jerusalem, and by extension, Israel, we read that “those who love you [will] be secure.

”  This is a clear signal that God would be pleased that we pray for Israel’s peace and safety because God is not giving up on Israel (Rom 10:1).

Believers today are grafted into the natural olive tree – described as ethnic Israel – for we are “fellow citizens with God’s people and also members of his household” (Eph. 2:19).


Romans 11:24 is clear about this: “After all, if you were cut an olive tree that is wild by nature, and contrary to nature were grafted into a cultivated olive tree, how much more readily will these, the natural branches, be grafted into their own olive tree!”

What about the Lost 10 Tribes of Israel?

Perhaps you have heard about the lost 10 tribes of Israel which were separated from Judah when the Northern Kingdom was taken into captivity by the Assyrians (2 Kings 17).  The fact is that nothing is lost to God.  They are lost to history perhaps, but to God, never!  Revelation 7:4-8 says that these tribes are not lost if God knows where they are:

“Then I heard the number of those who were sealed: 144,000 from all the tribes of Israel.

The Remnant of Israel

God has not rejected His people Israel and today we are Jews who are ones inwardly as Paul writes in Romans 2:29 “but he is a Jew who is one inwardly; and circumcision is that of the heart, in the Spirit, not in the letter; whose praise is not from men but from God.”  Neither has God rejected His chosen people.

Paul testifies to this fact in Romans 11:1-2 “Did God reject his people? By no means! I am an Israelite myself, a descendant of Abraham, from the tribe of Benjamin. God did not reject his people, whom he foreknew. Don’t you know what the Scripture says in the passage about Elijah—how he appealed to God against Israel.

Further, Paul says that “If some of the branches have been broken off, and you, though a wild olive shoot, have been grafted in among the others and now share in the nourishing sap from the olive root, do not boast over those branches.

If you do, consider this: You do not support the root, but the root supports you. You will say then, “Branches were broken off so that I could be grafted in.” Granted. But they were broken off because of unbelief, and you stand by faith.

“I do not want you to be ignorant of this mystery, brothers, so that you may not be conceited: Israel has experienced a hardening in part until the full number of the Gentiles has come in [or has been saved]. And so all Israel will be saved [true Israelites, whether ethnic or spiritual, e.g.

Rom 2:29], as it is written: “The deliverer will come from Zion; he will turn godlessness away from Jacob [Israel]. And this is my covenant with them when I take away their sins” (Rom 11:25-27).  This does not mean that all of Israel will be saved…the entire nation and all Israelites of all time, but those who come to believe in Jesus Christ.

This will happen someday when Israel finally recognizes Jesus Christ as the Messiah.  The nation will finally accept Him as the Prophesied One.

Today there are Messianic Jews who already believe that Jesus is the Messiah.  The national stock of Israel will join these Messianic Jews, but not until the “fullness of times” or when the last person is saved prior to Christ’s return as King of kings and Lord of lords. That time appears to be fast approaching.

Jerusalem means “king of” (Jeru) “peace” (Salem).   Jerusalem is anything but peaceful right now but the King of Peace is coming.  Until then, believers ought to be praying for the peace of Israel and for the King of Peace to come soon.  Even so Lord, come quickly.


That is my prayer and I hope you will join me in praying for His Kingdom to come and for the peace of Jerusalem and for Israel.

Was this article helpful to you? You might this one also:

Would you to get the daily question in your messenger? Just click the button below to get started.

Opening Prayer For A Christian Conference

Prayer For Protection From Danger In The Night

Prayer for Men with Families

My Prayer for Today

Prayer For A Newly Married Couple